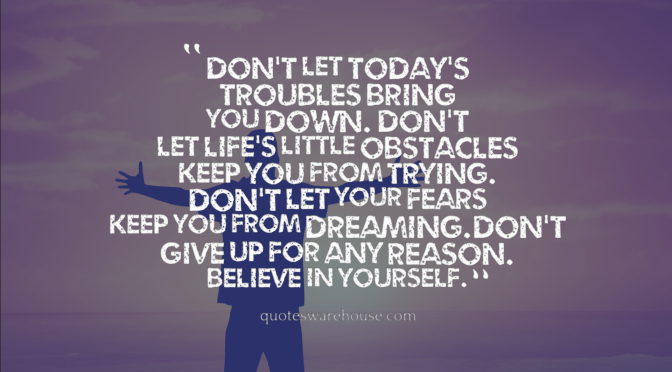 A lot of the time I find myself lost in thought. Now, I’m no Aristotle or Friedrich Nietzsche, but I do tend to think about parallel universes, existentialism, relationships, human behavior, the thought process, feelings/emotions, and overall what makes people tick. To me, these are entertaining and novel ideas to ponder. Lately, I’ve been thinking about the idea of change and venturing into new territories and why it is so scary. How often do we go out of our way and try new things, only to end up quitting? Seriously, we give it the good ole’ college try and eventually, we end up not doing that activity anymore. Why is that? After scouring the most reliable of sources (the internet) for an answer, I’ve come to the conclusion that we are at the very least, weak individuals and at the best, we are human beings with an ego that will eventually fuck up. But why though?

After some more digging (admittingly half-hearted), I’ve come to understand that the main reasons why we end up quitting, is that negative thoughts tend to consume the mind. From what I understand, the reason why we think so negatively, is because, this is a mechanism for survival. A survival strategy that forces us to look at what’s wrong and protect ourselves from danger if need be. Upon reading this, my first reaction was, “this is some ole bullshit”. Why do we need to protect ourselves from improvement? As I thought about this some more, it slowly started to make sense. Here’s how I broke it down in my head. When you start something new, no matter the activity, you are starting from scratch. So there is a sense of the “unknown” that is present. For instance, let’s say you are going to start a martial art, right. First thing you do, is research which art form you want to practice. You may spend several days, maybe weeks looking for the “right” one. Once you’ve found the martial art you may want to try, you go to that local gym/studio an introduce yourself to the teacher. Now your nervous. You have no idea what to expect. You’ve done your research, you’ve YouTubed the hell out of that martial art, so you should have an idea, right? Wrong! You don’t know shit, homie. Now you show up for class, not only are you nervous, because it’s your first time. You don’t know a damn soul in that class. Now everyone is looking at you like, “who the fuck is this guy?” Great! Now all eyes are on you. Your heart rate is up, you got tunnel vision and can hardly hear what the instructor is teaching you. Now he/she breaks you up into partners to practice what they just showed you a minute and half ago. You don’t know the nigga you’re partnered with, and because your so nervous, you don’t know what the hell you’re doing or supposed to do either. So thee’s the “unknown” element we’ve talked about earlier. You’re in an (un)known environment, with unknown people, doing an unknown technique expected to be performed with “unknown” expectations. That’s a recipe for a cluster fuck cocktail. But there you are, trying something new. It goes well for awhile. You show up to class, your excited, everyone is telling you you’re doing good, even though you feel like you suck. Things are going great! Then, Boom! One day, you wake up and decide that you don’t want to go to class tonight. At first, you have legitimate reasons. Work schedule conflict, kids, spouse, life, etc. So, you tell yourself, it’s ok. I’ll just make go next time. Then the next time comes and again, you have an excuse. Next time, I’ll go. Next time comes and goes and all of a sudden, you’re not doing that thing you were once excited to participate in. Sound familiar? Well, it should. That’s you quitting.

You get where I’m coming from right? Like this is the stuff I think about. Why do we easily find excuses to quit things? It could be whatever, relationships, new activities, fitness, religion, hobbies, learning a new language, etc. Once we encounter a smidgen of adversity, we say “fuck it” and move on. Personally, I find that we are lazy creatures at heart. Let’s be honest, it’s easy to do things once you know what the outcome is going to be. It’s when we are blind to the full potential is what separates us and makes us stronger. Yet, we shy away from that. Sure we can find things that “motivate” us to do more or to do better, but I’m an avid believer that motivation is useless by itself. It’s more of a call to attention than anything else. If anything it’s an emotional response to action. Like most emotions, that shit is fleeting. You have to have more than just motivation to get you going. You have to have will, determination, and just a insatiable appetite to bettering yourself. Thinking more about it, you almost have to have an obsessive drive in order to make and keep the necessary changes in your life. So what’s my rant about? Well, I wanted to understand what makes us quit, we’ve explored that. It’s because we are weak individuals. Or as I like to say, we are lazy. Because of this, we will find any and every excuse to quit. The solution? Finding something that overtakes your soul. You have to be obsessive to a point that you are willing to give up your “so-called” life to do the very thing that you obsess about. We all have the ability to exceed our limitations, you have to be willing to endure the pain that accompanies.

If you don’t like reading long posts, here’s an audio version of what I’ve written instead:

Guys of the Roundtable

Guys of the Roundtable